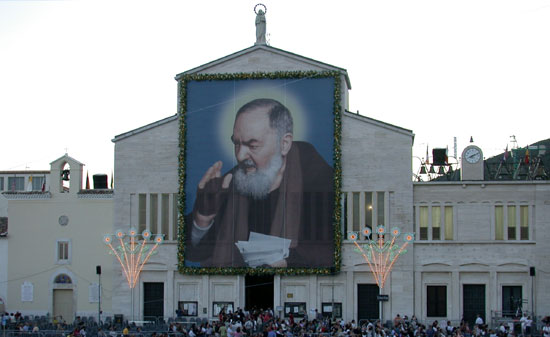 WE ORGANIZE DAILY EXCURSIONS FOR SAN GIOVANNI ROTONDO, FOR THOSE WHO STAY IN OUR FACILITIES.

When you think of Gargano, what comes immediately to mind? Certainly the exquisite flavors of the products of this genuine land, the intense and changing blue of the sea and the sky, the thousand shades of green of the countryside, but all this has a soul, expressed by the great spirituality that has always characterized the so-called “Mountain of the Sun” since ancient times: in fact, there are many destinations in the area for religious pilgrimages.

The charisma and fame of Padre Pio, Francesco Forgione, have always attracted many pilgrims to the Gargano pilgrimage towards San Giovanni Rotondo. Pilgrims saw him as a spiritual guide, as well as a great healer to whom to cling as the last hope in the cases of greater need. A popular following that has practically never ceased to spread. It did not fail even in the period between the 20s and 30s of the twentieth century, when the Holy Office questioned the authenticity of the stigmata and miracles attributed to Padre Pio,  preventing him from celebrating mass.

The restrictions were formally withdrawn in 1933, but until 1968, the year of the disappearance, the figure of this friar, beloved by the faithful but often opposed by the Church, remained controversial. A moment of great conciliation was instead in 2002, when, after the various process of canonization, Pope John Paul II had the honor of proclaiming Saint Pio of Pietrelcina.

The great following of the faithful has led to an increasing number of visitors to the holy places of worship linked to the memory of Padre Pio, up to making the Church of Santa Maria delle Grazie insufficient. Therefore, to meet the needs of the pilgrims that flowed ever more in San Giovanni Rotondo, the Capuchin Order has felt the need to erect a new church. The project was entrusted to the famous architect Renzo Piano, a true “archistar”. After about ten years of work, in 2004, the building was inaugurated, in a round shape in accordance with the name of the city; in addition to being the main place of worship of San Pio it’s an attraction for those interested in architecture. The massive and structural use of the Apricena stone; modern design; the absence of the tabernacle in the main liturgical hall; the use of copper (which gives the characteristic green color) for the coverage of the Church are all still open questions, on which the debate does not cease to feed itself.

Criticisms and compliments are raised from the right and left, certainly there is no shortage of ideas and reasons for thinking about an excursion to San Giovanni Rotondo, in your next holidays in Vieste, to discover the places of Padre Pio and the new church designed from Renzo Piano.